What times do current moderators, and moderator candidates, generally feel are their most productive on SF?

I'd really, really like to know what times each moderator and candidate feels are their most SF-productive expressed in UTC.

The reason for the question is that SF seems to have users - and consequently problems needing moderator attention - from all over the world, now, and I sometimes get the feeling that the existing moderators are clustered in terms of what times they tend to be on. At some times of day, I see flags getting attended to with super efficiency, but at other times, I get the vague impression that they languish somewhat.

It seems to me that if we ended up with, say, most moderators being in the US, and some in the UK, and they all did most of their moderation in working hours (and I'm not saying that's the case, only using a hypothetical example), we'd have good moderator cover from about 0900UTC to 2400UTC, but not so much in the remaining time. In such circumstances, I'd look more favourably on a candidate from, say, Vietnam or Australia, who spent most of her time on SF during her working day, than on an otherwise-stellar working-hours candidate from, say, Germany, or an evening-hours candidate from the UK.

So, existing moderators and candidates: if you don't think this is a completely stupid question, would you mind saying in UTC what your "core SF hours" tend to be?

Edit: they say a picture is worth a thousand words, so I've tried to express people's estimates of their core hours on weekdays into the diagram below. Current moderators are in green, candidates in red; solid boxes are people's "solid" hours, whilst boxes in outline are maybe/sometimes hours. I hope it's OK to do this, and that it will be helpful.

The statistic of "number of current moderators online" is derived by treating a "maybe" hour as half a "core" hour. 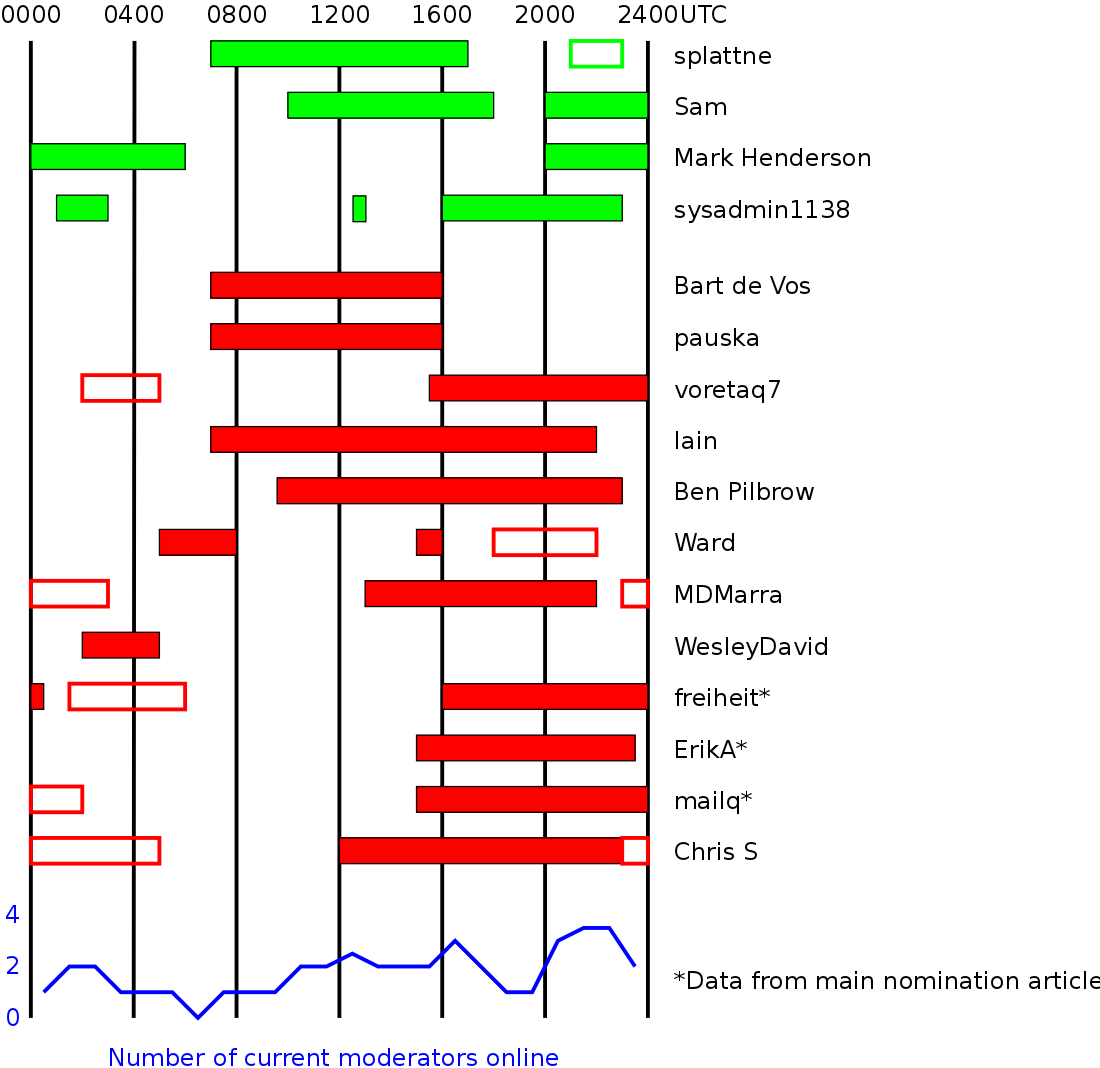 Edit 2: Nominations have closed, the primaries are well underway, so I'm ceasing active maintenance of this diagram. If anyone would like to repeat the exercise in future moderator elections, the .dia source file, available under GFDL with no invariant matter nor back nor front cover sections, can be found on teaparty.net.

This is how it looks graphically:

It's a google doc spreadsheet, so for new entries please modify it here, take a new screenshot and replace the one in this post.

It depends on my work pensum and the level of concentration I need for my work, but usually I'm checking the site (at least hourly / every two hours) between

and between (not every day)

"Session length" between 2 to 10 minutes depending on how much time is at my disposal (I spend more time during my lunch break at ~ 1330UTC.)

Obviously, I don't maintain that rhythm when I'm not in the office or at home – which is maybe once or twice in two weeks.

Depending on how much work I've got on, in usually pretty active between 10am and 6pm GMT an then again from 8-12pm GMT. Unfortunately I have limited access to chat a lot of the time but I try to keep up with the flags.

..with some additional check-ins up until 00:00 UTC on weekdays. Weekends would vary.

Sorry for copying your answer Bart, but we're very similar in terms of work hours :-)

Variable, but for the most part:

I'm definitely much more active in the evenings, but I do pop in during the day at work. On weekends it depends on what's going on in real life, but I can usually get at least a few hours in.

My core hours are probably between 09:30 and 23:00 UTC, but that's obviously all dependent on what life throws at me.

with some additional check-ins up until 2300 UTC on weekdays. Weekends would vary.

From my nomination blurb:

I work in a relaxed Higher-ED environment, which makes me available from about 1300-2200 UTC during the work day, as well as the time I spend on SF at home, which is sporadic from 2300-0300 usually.

That's when I moderate. I'm occasionally there before 1600 UTC, but that's infrequent enough that it isn't worth mentioning. I'll be in chat if I have time for a semi-continual attention suck, but with the work cycle where it is that isn't happening much these days.

My time online seems to vary a bit more than others', but here goes:

For purposes of entering this into Mark's answer, I'm going to put in the first three slots and leave out the fourth. That's probably the best overall representation.

Not the answer you're looking for? Browse other questions tagged discussion election moderators election-2012 .