Why is HopelessN00b stalking me?

Why is HopelessN00b stalking me and mass-closing my questions? 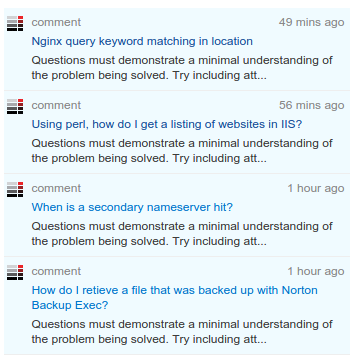 I wouldn't take it personally. I have it on good authority that the guy's just a prick.

But, he's a prick who's going through a massive tag cleanup effort at the moment, so he probably bumped into a group of your old questions because of their tags.

I'd venture a guess that upon reviewing those questions with the site's current topicality rules in mind, he closed them because it was appropriate to do so. I bet he also retagged them, and even went through the effort of (temporarily) locking them so them didn't get bumped to the top of the active view and end up mass-downvoted.

For a guy who's such a jerk, that was uncharacteristically thoughtful of him, I think.

5
Closing duplicate questions on Meta
3
Flag declined - I don't understand the rationale behind why
0
Question quickly downvoted and closed. Can someone explain why?
1
I don't understand why a question is not a REAL question?
2
Request for retagging tinc-related questions
1
Why was my post closed by a moderator?