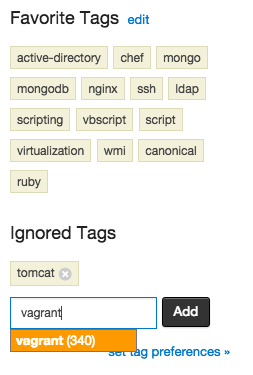 23
Random sort for Unanswered questions
3
Is this a "Good Subjective" question?
67
Why the hostility?
16
Interpretation of Off Topic
10
Are questions about ERP products on-topic here at Serverfault?
26
What should Server Fault do with questions about web hosting control panels?
7
Where would I ask a broad question about maintaining new technologies
2
What is the definition of "managing information technology systems"? (with particular reference to Heroku in this case)
14
What makes virtual box off topic on server fault?