How can we measure the health of ServerFault?

What tools or metrics do we have to measure the health of the ServerFault community? I mean that are available to non-moderators.

I've read lots of debates here over the years about how healthy the community is. I'm not trying to reopen those. But just now, I was looking at the Questions feed on the home page, and I noticed that of the questions on the first page:

It's great that we have junior sysadmins who come to learn, but this seems like an unhealthy balance. But it's just anecdotal.

So what metrics can we go and look at that try to answer the health question? 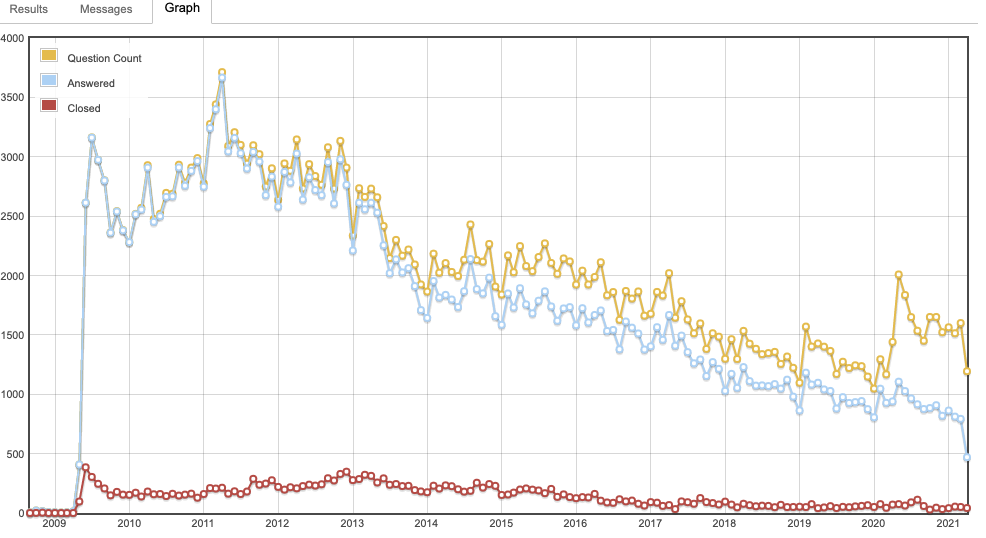 That graph shows a steady decline in the absolute number of questions asked and answered on ServerFault.

So by that metric the site is in decline and has been for years.

2020 saw a trend reversal, but only in the number of questions asked rising sharply.
(Maybe because people working from home due to restrictions get less mentoring and/or are less inclined to "bother" their colleagues to ask a question and turn to online resources instead?)

The absolute number of answered questions in 2020 didn't show any increase at all, but rather continued the downward trend. So percentage-wise much more questions remain unanswered now. That aggravates the appearance of decline of the site.

Since you need to be registered user to be able to vote the number of votes cast might be another metric to show “community” and participation : 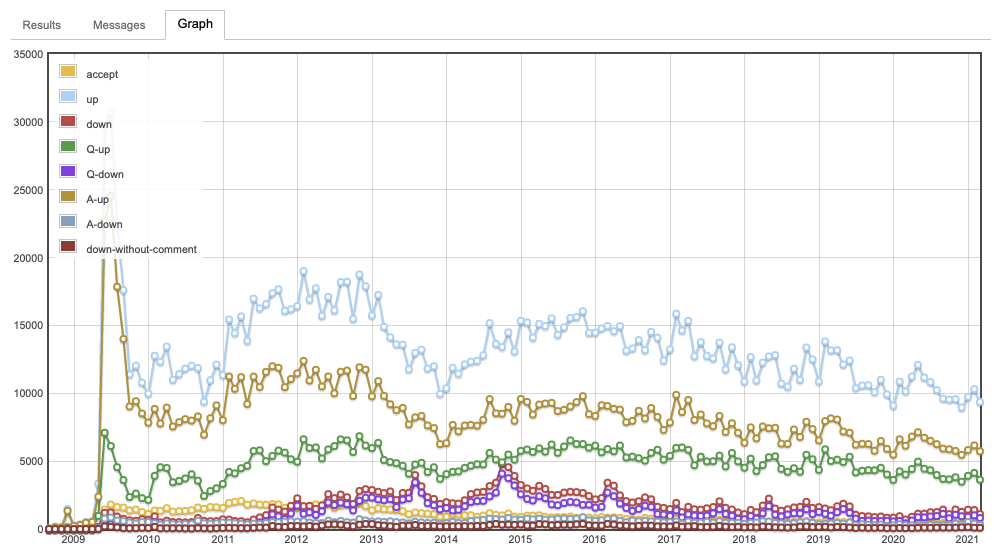 That metric shows a different pattern, at first glance despite some fluctuations the number of votes in the largest categories appears to remain quite steady.

That suggests that the number of additional questions posted in 2020 did not result in an increase of the actively participating community, but it doesn't suggest a decline either.

Several times this week I've gone down the questions sorted 'Newest' and 'Active' and what a disappointment. I used to find at least one or two juicy questions (and with great answers!) and would regularly learn stuffs that way. Now just garbage and no or poor answers.

I am now in agreement with Iain that SO has destroyed this site by flooding it with dev-support questions. Since the devs are highly important thus cannot be bothered to stoop to the lowly level of contributing back with answers here for other SO devs, the site just continues in decay.

4
Are questions from high-rep users more valuable?
18
How many moderators do we need?
16
What's wrong with ServerFault community?
4
is it legal for another site to skim the serverfault feed
32
The Server Fault Wiki of recommended practices
35
Why SF is failing - the dismal future of ServerFault
7
What questions are on topic for ServerFault? What is the right thing to do if I asked an off-topic question?