It's been a bit quiet in meta.SF the past few days, so I thought it was time to stir the pot. :)

So, I came across this question just now. Reading through the comments (see comment thread screenshot below), I flagged one for being "not constructive", and it was declined. Now, I couldn't care less about the declined flag. What I do care about is the fact that it is considered acceptable for high-rep users to treat new users like this. Sure, TomTom is right, this question was off-topic. That's fine - no need to insult and disrespect the OP for posting an off-topic question. Just VTC and be done with it.

Could someone (preferably the moderator who declined the flag) explain:

In the face of the numerous "THE SKY IS FALLING" threads on meta recently, I've been trying to remain engaged and optimistic. If this is what can be expected of our moderation staff going forward, though, I fear my optimism will wane quickly. 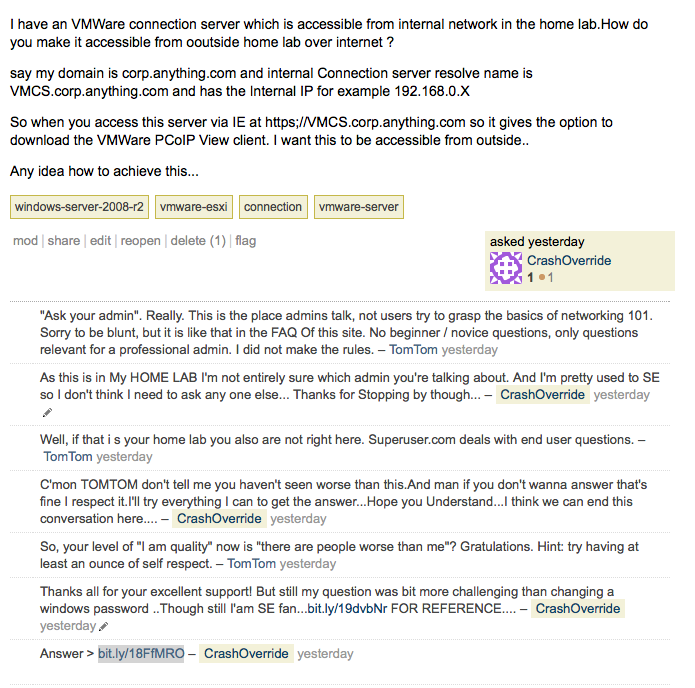 I'm pretty sure I declined the flag on this comment.

I say I'm pretty sure because the comment looks familiar; however, comment flags like comments are second-class citizens, and there's little or no history kept for them. I looked through my own mod history but wasn't able to confirm that I acted on any particular comment flag; only the fact of a deleted comment is logged.

I'm also sure that it was a mistake to decline this flag, as that comment really needed at least a good editing. You have my apologies.

Unfortunately the UI for handling comment flags has a lot of shortcomings; as previously noted, there's no record kept of how the comment flag was handled, and worse, when you do handle a comment flag, the system completely removes it from the screen. So if I hit 'dismiss' by mistake, it's very difficult to go back and find the comment again. By contrast, after handling a flag on a question the question remains on screen but collapsed to its title, so a mistake can be easily rectified.

I think it's time to go raise a little hell on mSO about the sorry state of comment flags and see if this can be improved at all.

Regarding the question in question, this one wasn't me but looking at them the comments here are definitely over the "Be Nice" line. (Crash Override was also being a bit of a lunkhead to be honest - their comments REEK of "I'm too special to have to read the topicality section of the help center" entitlement, but we still have to "Be Nice" when we tell someone they're being a lunkhead.)

I went and zotted the whole question as it was off-topic and cleaning up the comments wouldn't help that (plus it was collecting delete votes anyway). The rest is a matter for the grues and badgers...

The edit to TomTom's comment on this question was (part of that comment was wrong but not wrong).

With respect to the above comment, declining the flag there was solely an administrative convenience: Comment flag handling options are "Delete" or "Decline" (there's no "Valid but I'm not going to do anything" button like there is for regular flags).
If we delete a comment it's annoying to get it back (or we have to write a new one), so if I'm editing a comment to "fix" it I generally decline the flag and make the edit.
I'll be the first to admit that this is a crappy workflow but it's a time-saver and I'm a lazy bastard :-)

I'm not the moderator who declined it. I can't speak for them, but can note that since the decline that moderator has been inactive (random guess: he was going to do something, but got pulled away?).

What I can do, is cleanup the comments. You're correct in thinking that TomTom is out of line (as usual). There are a few users who regularly play hop-scotch with what's acceptable to post in comment, and get banned regularly for it. These users aren't pera-banned essentially because the community upvotes their posts. It's certainly not that high-rep users get a free pass or anything like that.

Not the answer you're looking for? Browse other questions tagged discussion doomed .