Disagree with a rejected flag

I recently had this answer in my queue.

I flagged it as being NAA because to me it simply states having a similar problem as the OP.

As it stands, to me itlooks like this answer can't in any way provide an answer to the question, which if this post is an indication should be a reason to flag it. Now this post is meta.SE and not meta.SF, so perhaps I'm wrong.

Reading it, it looks like the person answering had a problem, and what the OP did was his solution.
I don't see how that adds any value to the topic.
Regardless of if it's correct or not, if the answer doesn't actually offer a possible solution, should we keep it? If your answer is I did what you did without stating what was different with what you did... How does that constitute an answer?

My main reason for asking is future flagging, my current assumption is that I'm probably incorrect. But as it stands I don't think I'd do it differently next time. Because I just don't see the difference between this answer and a me too.

I declined your flag because that answer is an answer, albeit not a very well-written one.

He is not saying that "what the OP did was his solution". He is saying he had a similar problem to the OP and that what he did, "set the cookie from the top domain", was the solution.

The thing is, "not an answer" and "a very bad answer" can often be really hard to differentiate between. And to be completely transparent about it, with the various tweaks and evolutions done to the flagging and review systems, the not an answer flag is basically something that I think should never be used anymore.

If you think a post should be deleted right away because it's offensive,

The better approach with that kind of answer is to flag it for being very low quality. It will then go into the low quality review queue for a while, and unless the community saves it by reviewing it as "Looks OK" enough times to get it removed from the queue, it will become a flag for moderator attention at some point.

The low quality queue approach also has the advantage of letting reviewers leave automatic comments on the answer explaining why it sucks, as well as exposing the answer to more potential downvotes, which contribute to the automatic question and answer blocks Stack Exchange has implemented. So next time, if there's any doubt at all, flag it as low quality.

Just so you know, if I act on something I see in the low quality queue, I see: 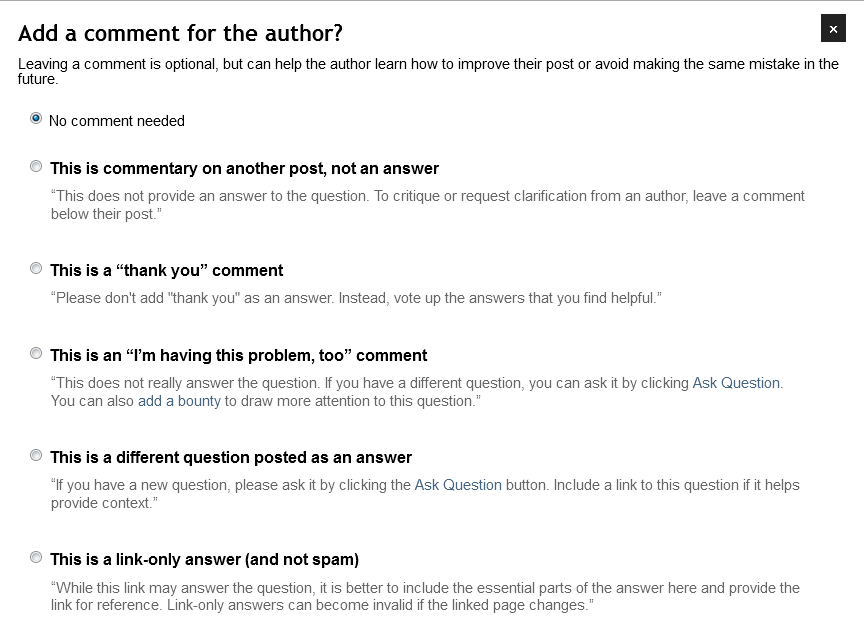 The moderator system has gotten a lot less attention and polishing and such, and as a result, basically makes me do everything manually. If I want to accept the flag outright, I click the delete link, and "the not an answer" answer gets blown away without any other action.

If I want to comment, or downvote, I end up having to open a new tab, manually say what I want to say @ the user, flip back to the other tag to then accept the flag, and then close out the "extra" browser tab... and that's my process to minimize the amount of effort I have to put in. Obviously, most of the time, I can't be bothered. Since the vast majority of these crap answers come from hit-and-run users (or old users who haven't been here in a year), I'm not going to exert extra effort in what I know is an futile effort to educate a window-licker who almost certainly won't return to read my comment anyway.

3
Missed opportunity to provide a good answer to a less than ideal question?
14
How to find and clean up bad questions
9
Is it OK to just ask a question so you can post your own answer?
10
Disagree with a declined flag
9
How to deal with "marginal" answers on review?
5
your post was converted to a comment
9
What is the etiquette here regarding duplicate posts?
8
Question modified into new question after being answered
1
"Not an answer" flag declined