Question seeking tips and suggestions from technical experts closed, why?

Is this a shopping Question, It is not being locked or down-voted, I can say it is a shopping question but I won't as the user may have narrowed down his / her selection to two products and may be seeking some real world feedback:

Whereas : My Question was recently categorized as a shopping question and that I was doing capacity planning ? Why on a website would I do capacity planning, I was seeking technical experts tips, suggestions - sometimes we miss things and later remember. I read SF Blog too where they write about their SQL migrations etc.

I was not asking a dell vs ibm or symantec vs Microsoft question.

Two of SF Operators MdMarra and voretaq7 commented - voretaq7 even gave me a link (http://blog.stackoverflow.com/2010/11/qa-is-hard-lets-go-shopping/) saying that my question's point C is falling into this category and I disagree it does not.

I flagged MdMarra's comment as off-topic and I felt it should be removed, I flagged it but instead my Question got down-voted ! :-)

I am disappointed - I always thought of Server fault as a learning and sharing place. I know people can make mistake in posting or asking something in the wrong place but I still don't think I made a mistake in phrasing my question.

with all honesty - do you think a person will ask someone on server fault to design their solution, I am only asking as I have been given a chance from my seniors at work to come up with a documented design and I am reading symantec docs, forums and I already have made notes, all i was seeking was assurance and I got this treatment.

Disappointed with SF - The site I liked over other forums and especially EE.

In the interest of disclosure, the full comment thread from the original question is reproduced below (comments shaded in red have been deleted): 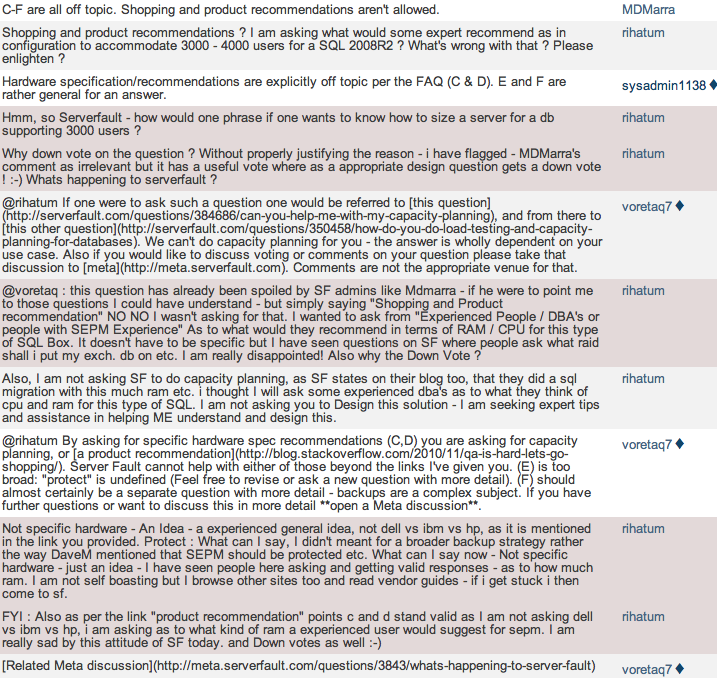 Be ye warned -- this is a long answer!

I feel your question is essentially a good one (which is why the lock I applied is temporary, and I haven't suggested closing it). A few of the points you raised are not good fits for Server Fault, but you can easily edit your question to make it an excellent and useful question with lasting value.

The problems I see

Two of SF Operators MdMarra and voretaq7 commented - voretaq7 even gave me a link (http://blog.stackoverflow.com/2010/11/qa-is-hard-lets-go-shopping/) saying that my question's point C is falling into this category and I disagree it does not.

Actually three of us grumbled about points C & D (MDMarra, sysadmin1138, and myself) -- You may not be asking us "Netgear or Linksys?", but it still seems like you're looking for either capacity planning ("Buy a box with 6TB of 15K SAS drives and a terabyte of RAM") or product suggestions ("Buy an IBM x3950") to answer those two points.

Capacity planning is generally considered unanswerable as there is no good universal benchmark (1000 users sitting idle are a lot less resource intensive than 1000 users hammering the DB server with complex queries - only you know your environment/users well enough to make these calls).
Specific vendor recommendations/comparisons/lists are off-topic network wide per the blog post you mentioned. The last time we recommended Acme brand bird seed a coyote sued us for emotional trauma.

I'm the Big Bad Comment-Deleting Post-Locking Mod. (As is often the case when comments start disappearing).
The comments in question got zapped because they were more appropriate as a Meta discussion here (why a particular question or components of it are on/off topic, why certain comments are allowed to stay while others are deleted).

It's also general (though loosely enforced) policy network-wide that comments about "why was my post downvoted?" are inappropriate as they tend to lead to protracted discussions (arguments) in comments about voting. By extension "I flagged X's comment" leads to the same kind of mess, and will either be scrubbed from the comment or deleted outright.

The lock was applied as a cattle prod to get you to open this meta question. Since it worked the lock is now cleared.

Clarification of a question/answer a result of comments or meta discussions should really take the form of edits to your post rather than comments -- the question should lead naturally to the sort of answers you want. (Incidentally that is one of the reasons I closed your re-post: If a question needs to defend itself or explain what it's seeking as an answer there's probably a better way to ask the question that leads naturally to an answer.)

I flagged MdMarra's comment as off-topic and I felt it should be removed, I flagged it but instead my Question got down-voted ! :-)

I declined that flag, as I felt MDMarra was pretty much spot-on, and do not consider the phrasing of that comment to be inappropriate, rude, or offensive (though it is perhaps a bit curt).

Comments (and flagging) have absolutely nothing to do with downvoting. In fact voting is a completely blind system from our end (even mods can't see who voted on questions).

Yes. Absolutely. It happens nearly every day.
People come to Server Fault with a vague concept and expect for us to provide them a full environment specification and pathway to implementation. This is a natural byproduct of Server Fault becoming more popular: users who don't know any better will expect this site to be effectively "free consulting".

I also don't think that's what you're doing -- like I said your question is fundamentally good. It can be improved to be excellent with relatively little work.

Specifically Re: the old question you mentioned, this question is still around because it's old. With attention called to it from this Meta post it will probably be closed soon if it's not gone already.

There are lots of old questions which are off-topic/not constructive based on today's window of topicality, and the scope of Server Fault has evolved substantially since it first launched (particularly over the course of the last year or so, as we are encouraging users to take a more active role in curating the site as a "walled garden" where strong questions that will be useful to a lot of people long-term (like points A, B, F, and possibly E from your question) can thrive, being asked and comprehensively answered).

This involves a certain amount of weed-pulling (knocking down older questions like that one when we find them) and just as much constructive pruning (refining new questions to make them excellent, not just good -- the point of this discussion)

I hope all of that makes sense - I'm happy to go over any points where you have questions either here or in chat.

I have cast a close vote on that question too, you are right, it is shopping also. Occasionally off-topic questions will get through, and not get noticed. This does not mean we should allow questions we notice as being off-topic to stay around.

I always thought of Server fault as a learning and sharing place.

Most Stack Exchange tend to have a far more specific goal. We want practical answerable questions, where a single person can post an answer, that isn't an opinion, but instead based on facts. The sites operation on a Question and Answer engine, and many of us have a strong desire to not let it devolve into the horrible experience that you see on forums, and sites like Yahoo Answers, etc. So it is a place where you can learn ans share so long as what you want to learn or share fits very nicely within the Q&A format.

Your question is far too broad you asked and most not very useful. You asked like 6 or 7 different questions in there.

You asked how do I make backups. But you haven't told us anything about your existing environment. I would assume you already have some backup system in place. It would be best for you to figure out if you can extend your existing tools. If not, call and ask the vendor. They probably have a good idea about how to make good backups.

If you have anything to add / correct - that will be really helpful... Stack Exchange is NOT a forum. We expect specific questions that will have specific answers. Asking for general advice often results in answers that just do not fit well in a Q&A site.

a) If we had these users distributed amongst two sites with AD DC / GC in each site, How would I restrict SEPM and Desktop Mgmt. solution to only check for users in their respective site ? b) At present all users are under one building but we are going to move some dept. to a new location (with dedicated connectivity), How would we control which SEPM / MGMT Server is responsible for which site ?

If you asked this as a question all by itself with the required supporting details, then I would probably upvote it. This at least is a good question that would fit in the Q&A format.

Asking how to setup SEP with across multiple sites could result in useful answers. It is clear, it is specific.

I also suggest you take a look at these pages. In my opinion your current questions are vary badly structured and in makes it difficult to read, and therefore difficult to answer. Asking a good clear specific question is absolutely critical to getting the most useful answers.

53
How can I ask better questions on Server Fault?
12
How can I get people to fully read my question?

16
Interpretation of Off Topic
9
Is it OK to just ask a question so you can post your own answer?
8
Should ServerFault loosen its tie and start allowing "Shopping" questions?
17
How does the community feel about deleting the April Fools' question?
2
Why was this question closed and moved to SU?