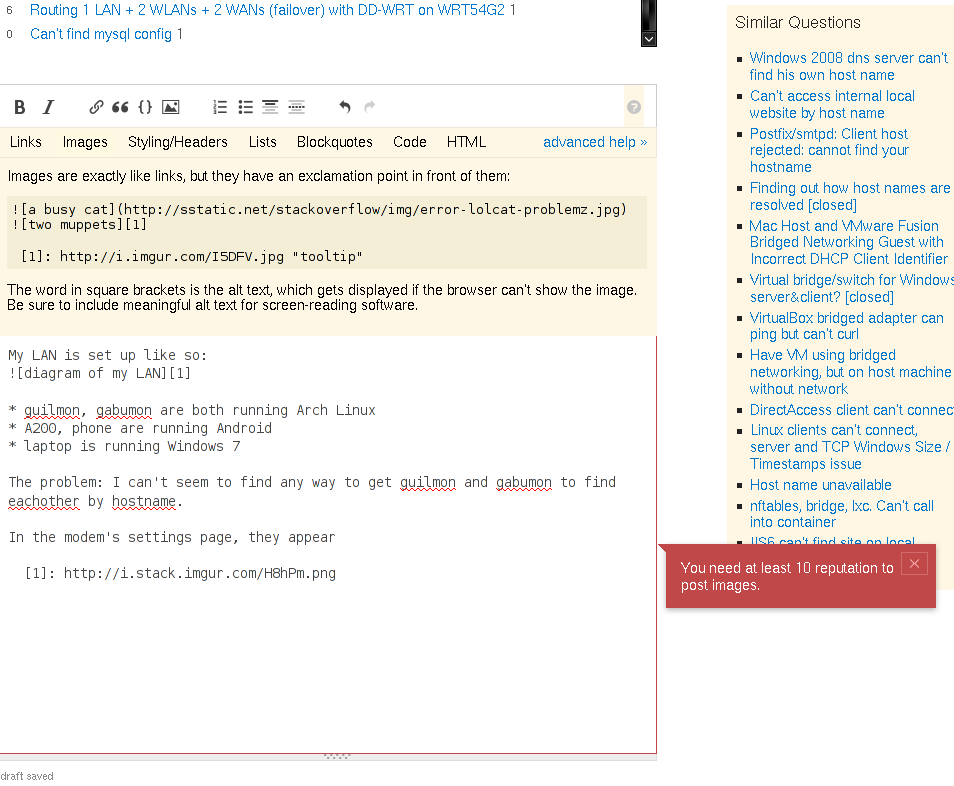 Seeing this (on Server Fault) had me asking a lot of questions:

You first logged in to Server Fault less than half an hour ago, at 21:30, so I am not sure why you would believe you had any reputation. There don't seem to be any other accounts on Server Fault which also used your IP address, nor any other guest postings.

Most of the remainder of your questions have already been answered in depth on the network meta site:

In short, you gain reputation and privileges independently on each site in the network. The fact that you know a lot about programming doesn't necessarily mean that you know anything about professional IT, for example.

Once you receive 200 reputation on one site, though, you will receive a 100 reputation bonus on all other sites, which eliminates most of the new user restrictions.

Why am I being told this halfway through writing my post instead of, say, when clicking the image button?

Javascript. (Sorry, that's all I got.)

Didn't I used to have plenty of rep on Server Fault? Where did it go?

I don't know if you have "plenty" of rep on some other account, but you have none on THIS account - it's a brand new account as far as I can tell.

Did you perhaps sign in to/with a different oauth provider? Or are you confusing rep on some other site (like Stack Overflow) with rep on Server Fault? (As Michael Hampton pointed out, rep on each site is independent because an expert in English may not be an expert in Electrical Engineering.)

Why is it separate from this site, anyway? Aren't they all the same network?

I'm guessing you mean "Stack Overflow" - the answer is because they are different communities. (A programmer makes a lousy sysadmin. Sysadmins are generally not the people you want writing your applications.)

See the final item on the list for more information.

What even is the point? It's just restricting a useful feature and forcing me to make my post harder to understand

Because spammers and trolls abuse the ability to post images.

If someone is looking up an answer on Server Fault and a big ol' goatse pops up on the page as their boss is walking by that may well get them fired.

BONUS: I can't even post this in Meta Server Fault because that requires rep too. I guess keeping things organized isn't a priority?

You need 5 rep to post on meta. That's one upvote on a question or answer.
Frankly if you don't have that much reputation in a community you probably aren't ready to be involved in its governance (kind of like how we have voting age restrictions, only at least this one is at least theoretically based on merit rather than arbitrary age).

You need 10 rep to embed images. That's two upvotes on a question, or one on an answer.

The bar is INCREDIBLY low. It probably took you longer to write this question & read my response than it would have to acquire the requisite reputation.

It certainly took me longer to write this answer than it would take you to get the requisite rep from a well-written question or answer :)

3
Recent big cleaning of reputation in ServerFault?
3
Negative reputation
2
late +100 reputation
4
Finding your reputation % in meeting reputation milestones
32
I'm challenging us to make the Christmas 2014 season be known as "killing them with kindness"
22
Should the rep requirement for creating tags on Server Fault be raised?
7
Why were my "not an answer" flags on these answers declined? What should I have done instead?
0
Hardware-Questions: Do they belong on Server Fault or on Super User?