I mean, sometimes content is intentional. Look at the revision history on this:

The question was from 2012. The content within was deliberate, and this was the accepted answer.

What motivation would someone have to edit 4 years after the fact, have the content rolled-back by the author, then make the same edit again?!?

This particular edit, whatever you may think of it, "clearly conflicts with the author's intent". 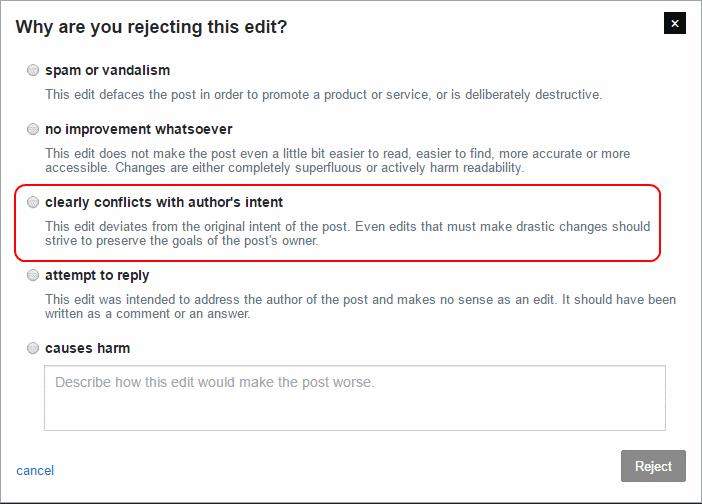 "Even edits that make drastic changes should strive to preserve the goals of the post's owner."

One of Ed's goal was to make a dig at Reiser based on his mugshot photo, and this edit clearly conflicts with that. It should be rolled back, for that reason. Not liking or disagreeing with part of a post is not justification for editing that part out, it is justification for using that little down arrow off to the side.

Furthermore, someone's mugshot with a tame, but derisive comment on it, is not really so inappropriate as to warrant summary removal from a post. Again, this is something that should be handled with a downvote, if anyone actually feels that strongly about it.

Not that I expect this to actually happen, but that's what should happen, according to SE's own guidelines. That it doesn't, is part of the broader problem with the community and, I'd argue, SE in general. Why bother having rules, if they're going to be enforced arbitrarily? As Ed said, just another thing on the pile of reasons for diminished interest and participation. Seriously, pick your battles... this is not something that's worth further alienating one of the very few quality contributors the community has left.

Can you explain to me how posting a mugshot of Reiser contributed in any way to the technical discussion regarding the file system he developed?

Regardless of what he did, he is still a human being and has rights and this part of your post was beyond disrespectful. Frankly, I find this appalling and I can't understand why you even object to have this part removed.

Oh, and by the way: We regularly remove content that is not related to the technical discussion and this also happens on old posts when people stumble upon them and flag them.

I'm going to have to agree with Sven. I have a lot of respect for you ewwhite, particularly since you guided me away from taking the wrong behavior hints from the rest of the community when I was a newbie, but I think this is a good opportunity for me to return the favor.

Putting aside my own (less than favorable) opinions of Hans Reiser, I think you're letting emotions get in the way of your usual rationality.

In short, your original intent was fairly harmless but I think you need to let it go. I don't equate this with pointless editing of old content, such as converting punctuation over to Unicode. This was not worth holding the line on.

That said, I did miss that there was a link to the Wikipedia article. Presented as HopelessN00b did in the comments of Sven's answer, that's definitely relevant. There's nothing wrong with linking to that article and presenting it similarly.

2
Making edits and approving edits on a question
7
Kill it with light mace: [windows-home-server] - or not?
7
Homewreckers wanted! Please handle these home-use questions
9
What is (or what should be) the etiquette for editing old questions or posts?
13
Editing an answer by adding significant new content?
7
Why is there so much focus on low-quality questions at-large?
2
Thread closed as off-topic - perhaps some slack needed?
1
Answer to 11 year old question